Exhibitions in the Tower

STONEWARE Photographs of medieval architecture by Christofer Herrmann The photographs presented here show views and details of medieval buildings in northeastern Poland (historic Teutonic Order of Prussia). In the selected photos, architecture and nature are presented in an atmospheric tension, material details with multi-layered traces of age and interior shots that convey a timeless silence. Christofer Herrmann is an art historian specializing in medieval architecture in Germany, Poland and the Baltic States. Studies and doctorate at the University of Mainz, habilitation at the University of Greifswald, professional activity at the Universities of Allenstein / Olsztyn, Danzig / Gdańsk, TU Berlin and Mainz. He has devoted himself to architectural photography since he was a student. 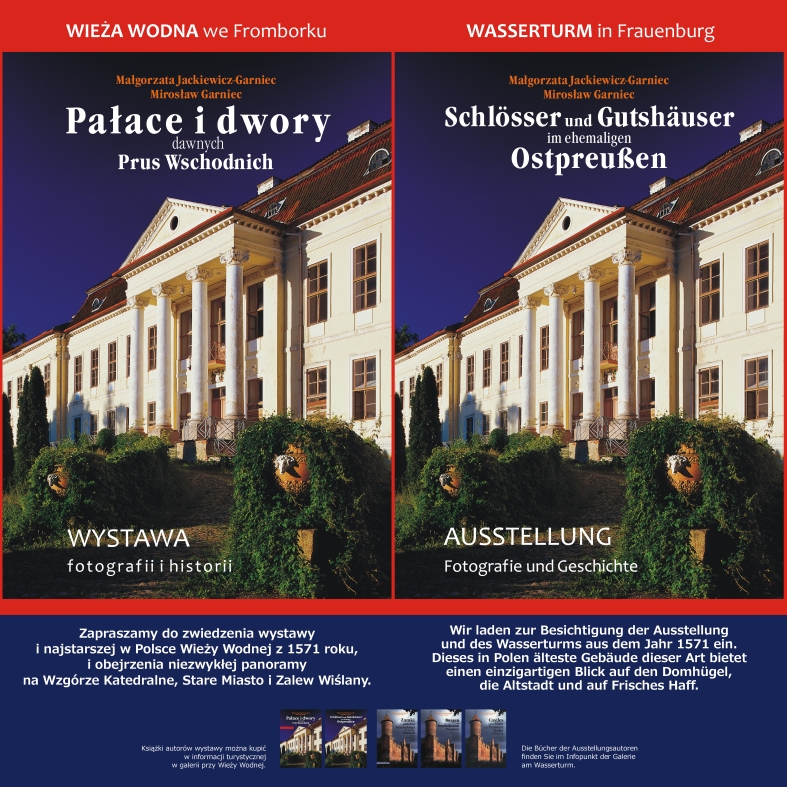 Art critic, art historian, in 1986 graduated from Nicolaus Copernicus University in Toruń, Faculty of Fine Arts, department of heritage conservation and museum studies. She worked in heritage conservation institutions in Olsztyn (BBiDZ, PSOZ). From 1993 to 1999 she was working for “Borussia” association. Since 1994 she has been working in Biuro Wystaw Artystycznych (art exhibition institution) in Olsztyn. Her duties include organization of exhibitions, editing exhibition catalogues, writing reviews. She also authors articles, pieces and lectures, mostly dedicated to the cultural heritage of former East Prussia and historic landscape preservation,

Graphic designer, photographer, publisher. In 1986 he graduated from Nicolaus Copernicus University in Toruń, Faculty of Fine Arts, with a degree in painting. His portfolio includes about a dozen or so graphic designs of books, for example, two-volume album Kościoły i kaplice Archidiecezji Warmińskiej (Churches and chapels of Warmia Archdeaconry) Olsztyn 1999, catalogues of art exhibitions, tens of posters for the Olsztyński Teatr Lalek (puppet theatre in Olsztyn), print advertising. Teaches painting and drawing in Pałac Młodzieży (community centre) in Olsztyn. Since 1993 he has been running his own publishing house Studio Wydawnicze ARTA. 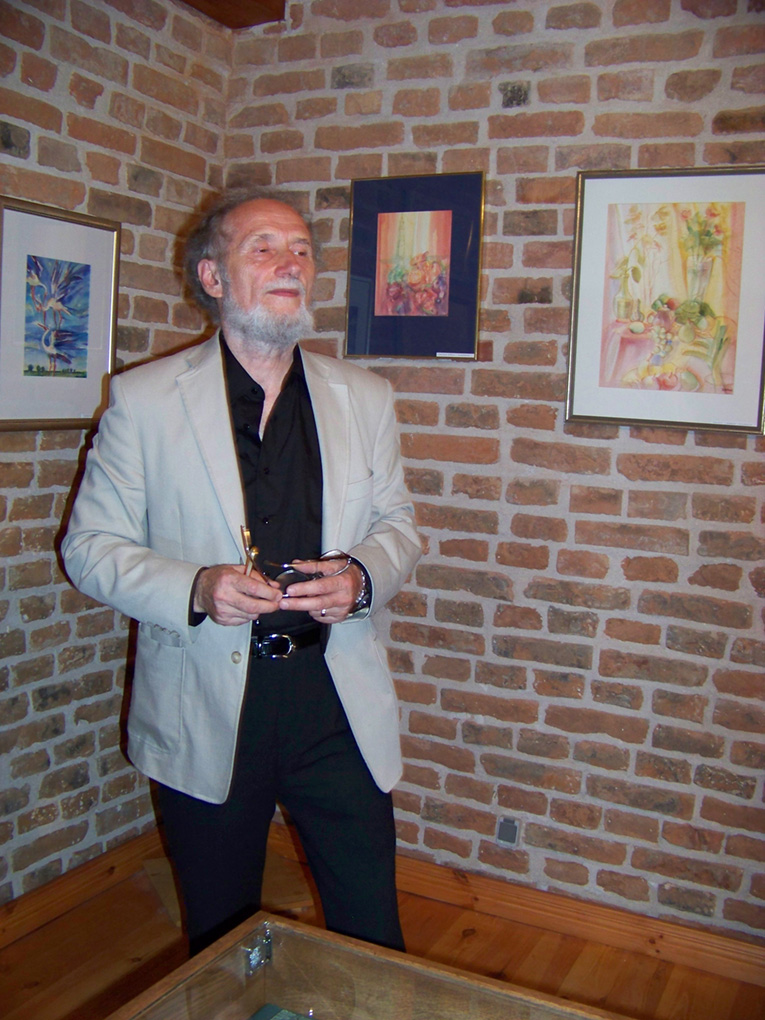 Visual communication, advertising, industrial design and landscaping expert, also specialises in drawing and graphic design. For many years he has been a university lecturer, head of the Fine Arts Design Department at the Faculty of Fine Arts of WSP (Teacher Training College) in Częstochowa (at present Jan Długosz University in Częstochowa). The organizer and the first Head of the Art Education Institute. Author of many publications dedicated to structures and visual communication as well as landscaping. Graduated from the Academy of Fine Arts in Kraków (1968) with a degree in comprehensive visual identification, at the Faculty of Industrial Forms, with further academic degrees from the same Academy (in 1975, 1982, 2000). His works are presented by 36 individual and 250 collective exhibitions.

In 1969 he was awarded the first prize at the international competition in Arezzo (Internationale Concorso della Medaglia); afterwards was a regular participant in international competitions and exhibitions, including Bienal Internacional del Deporte en las Bellas Artes in Madrid and Barcelona Biennale Internazionale Dantesca in Ravenna, in exhibitions accompanying FIDEM congresses (Federation International de la Medaille). As a member of FIDEM he participated in the congress in Budapest (1994) where he was awarded a special prize, and during the congress in Neuchatel (Switzerland) he was distinguished by a special FIDEM Medal. Among individual exhibitions of paintings, drawings and sculptures, the large exhibition in Bonifatiushaus in Fulda (1994) is worth mentioning, as well as three simultaneous exhibitions: Hafnarfjordur (Iceland), Reinbach (Austria) and BWA Częstochowa, celebrating his 30th anniversary of creative work (1999). As a member of the Association of Polish Artists and Designers (ZAPP) he initiated and helped organize an open-air painting event „Jurassic Autumn”, which since 1975 has been the venue for the Polish and foreign artists gathering in Kraków-Częstochowa Upland. All the time he has been an active participant in the Association (currently is a vice-president of the County Management of ZPAP). Decorated with a Medal of Commission of National Education (2000), Knight's Cross of the Order of Polonia Restituta (2002), as well as Gold Medal for Long Service (2012).

His works are in numerous art galleries and museums in Poland and all over the world, among others in Bonn, Chicago, Fulda, Hafnarfjordur, Kraków, Montecatini, Montreal, Poznań, Ravenna, Strasbourg, Warszawa, Wrocław, Częstochowa, as well as in private collections in Austria, Belgium, France, Iceland, in Germany, USA, Switzerland, Italy and Poland. 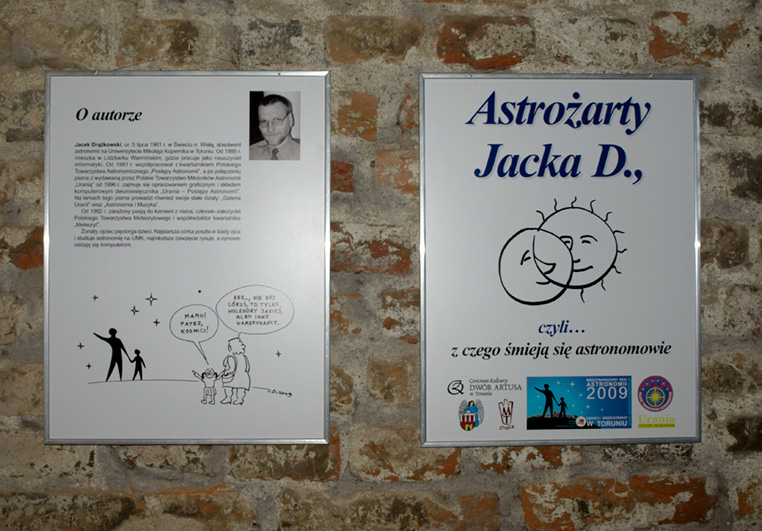 Initially the thirteen funny drawings by the astronomer Jacek Drążkowski were published as a calendar for year 2012; today they are displayed as an exhibition. Wherever the “astrojokes” go, they are always very popular.

Jacek Drążkowski graduated from the Nicolaus Copernicus University in Toruń with a degree in astronomy and is a member and founder of the Polish Meteoritical Society. He provides ironic comments to the reality and history.

2003 PRESENTATION OF MUSEUM OF LIGHT PROJECT 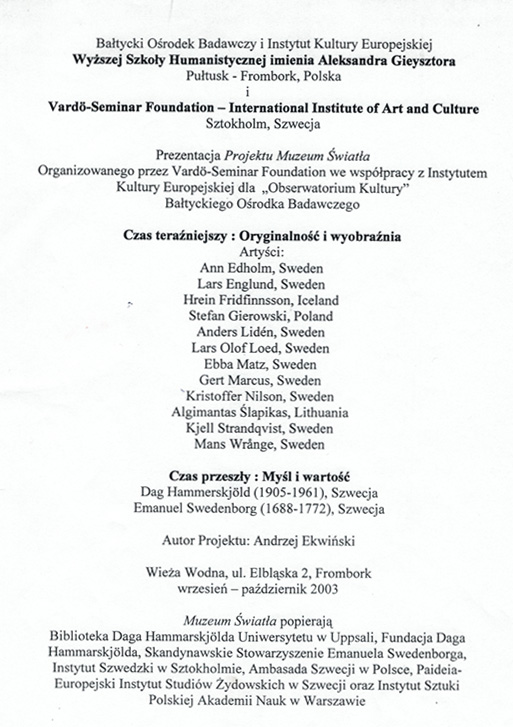